Home > The Asamblea Nacional Española appears in Reus and creates a delegation in Tarragona
22.11.2018 ANE News

Later they found a new location and could do the act without any problem, after not publicizing it and accessing by invitation. The reusences filled the room and they were able to hear all the keys and plans of the ANE live. In the presentation, Paula Fiestras, secretary of the ANE, said that “we must get back to unite Europe so that nationalisms disappear.”

The Asamblea Nacional Española is presented in Reus and creates a delegation in Tarragona, ANE Tarragona

Pau Guix, vice president of the ANE, said that “the association is a tool for the Spanish people to be a participant in the important decisions of the country.” Finally, the President of the ANE, Miguel Martínez, wanted to show his support to the Catalan Civil Society, following the false accusations of the deputy of ERC Gabriel Rufián, who defined this constitutionalist entity as “extreme right”.

Miguel Martinez also stressed that “the Spanish process must be internationalized, so in the coming days we will open delegations in Belgium, Korea and the United States.” And he stressed that “we have come to create a Spanish process that carries out the debate on the dissolution of the autonomies and bring a petition to the Senate of Constitutional Reform of the Repeal of autonomy.”

You can see the act of presentation of the Asamblea Nacional Española, in the video of our YouTube account that we attach here below: 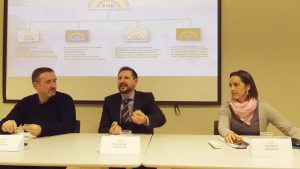