Home > The ANE asks that the congress initiate a constitutional reform to carry out a referendum for the dissolution of the autonomies.
16.11.2018 ANE News

The ANE asks that the congress initiate a constitutional reform to carry out a referendum for the dissolution of the autonomies.

The ANE asks that the congress initiate a constitutional reform to carry out a referendum for the dissolution of the autonomies.

The Spanish National Assembly (ANE) has been presented publicly this Sunday, November 11 at 11: 00h, coinciding with the anniversary of the 100 years of the armistice of the First World War (11/11/1918). During the presentation it was highlighted that the association was born to combat the nationalisms and populisms that plague Spain and Europe. His idea is a federal Europe of large nation-states that minimizes the secessionist movements throughout Europe and warns of the danger of the composition of the next European Parliament looming after the European elections of 2019.

But undoubtedly, the main proposal of the association has been what they call “Spanish Process”, which will begin with a Collective Petition so that the Congress of Deputies will initiate a process of reform of the Constitution that allows a referendum to dissolve the autonomies, which in his opinion have become obsolete. “They are an unaffordable economic burden and have been elements of disrepair of the Spanish nation, as well as being a catalyst of inequality among Spaniards and having created administrative duplicities that have an excessive and inefficient cost.” To do this they will carry out a collection of signatures throughout the territory and want to get the debate on the need or not of
maintain autonomy, be the preponderant debate in the next times.

The members of the “ANE” have also stressed that their fight against populism will spread to Latin America. Betting to strengthen ties with the rest of Ibero-American countries, as well as fighting the black legend of the History of Spain. The way you want to spread your message will be with the creation of delegations of the Spanish National Assembly all over the world. In this way, they intend to divert attention from the Catalan nationalist process, with the Spanish process, to ask whether the state of autonomies is not necessary, after almost four decades
creation.

You can support our “Collective Petition” on Change.org: https://www.change.org/p/senado-refer%C3%A9ndum-para-la-disoluci%C3%B3n-de-las-autonom%C3%ADas 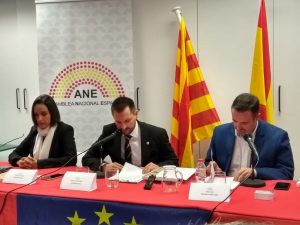 The ANE asks that the congress initiate a constitutional reform

There are no comments yet "The ANE asks that the congress initiate a constitutional reform to carry out a referendum for the dissolution of the autonomies."